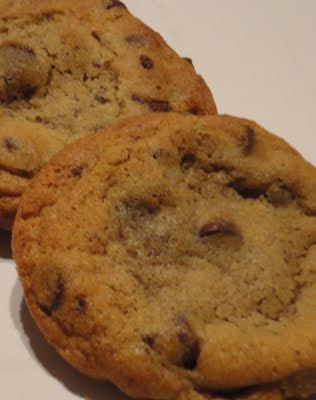 Chocolate chip cookies are hard to get right. It's such a simple cookie, really, so you'd think there wouldn't be much to it. But that's precisely why I think good chocolate chip cookies are so hard to come by. Besides chocolate, there aren't many complex flavors going on in that cookie, You can't hide, for example, a bland base flavor by adding the excitement of M&Ms or butterscotch chips or coconut. It's just the base and the chocolate chips.

It may seem odd, but for a long time, the best chocolate chip cookies I had ever had were the Nestle Toll House cookies sold at Subway. They definitely had the best flavor. Still, they were always too flat for my liking.

I've tried chocolate chip cookies from all sorts of places. I even try to make my own, when I can't find the best recipe, but I can never get them quite right, either . . .

I finally found the best, though. At a hole-in-the-wall deli in Austin. Specializing in sandwiches, salads, and soups, Fricano's Deli is an unlikely place to find the best chocolate chip cookie. It's a tiny place just north of The University of Texas' campus, and it's fantastic. To be sure, the sandwiches are delicious, but I was surprised to find that they made desserts from scratch.

When I was there the first time, I saw one of the employees mixing the cookie batter. She said something about how she put her "heart and soul" into the cookies. At first I thought it was sort of a silly thing to say, but a while later, after I had devoured my cookie, I realized that she wasn't kidding!

If you are in Austin, get your chocolate chip cookies from Fricano's only! I don't care what anybody else says about other bakeries in town -- trust me, they're not as good!


Update: Not long after publishing this post, I went to Fricano's to buy more cookies. I asked for the recipe, and they told me they used the one on the back of the Nestle Toll House chocolate chip bag! I couldn't believe it, but the guy I talked to assured me that's what they used. I'm betting that they use a bit more flour than the original recipe calls for . . . And maybe that woman I talked to before really does put her heart and soul into the batter! :)
Posted by Sara at 7:50 PM